In his 2013 report (Edible insects – Future prospects for food and feed security) the FAO (Food and Agriculture Organization of the United Nations) is clear: We must innovate to successfully feed the nine billion people who will leave on earth until 2050. Among the possible solutions proposed therein, entomophagy has a place of choice. And with good reason, as the consumption of insects has many benefits for humans and animals1.

First, insects are very nutritious. They are healthy, rich in protein, good fats, and contain high levels of calcium, iron and zinc. Their protein content is high, they contain essential amino acids, and they contain lipids and fatty acids2. Moreover, insects are rarely vectors of zoonotic diseases (as are animals) as being more genetically distant from humans, very few diseases are armed to deal with both insects and humains1. Looking toward livestock, many studies report that insects can be part of their diet safely, maintaining or improving their growth performance1, 3-8. Many farm animals are naturally entomophagous such as pork, poultry and fish, yet are fed from vegetarian feed. Farmed fishes are even fed with fish flour. Moreover, chitin, a component of the exoskeleton of insects, has positive effects in low doses on the functioning of the digestive system of animals, which could help decrease the intake of antibiotics in industrial farms9.

From an environmental point of view, insects produce very little greenhouse gases compared to livestock10. And since they are cold blooded organisms, they convert their food very efficiently in protein. For example, crickets require 12 times less feed than cattle, four times less than half as sheep and pigs and broiler chickens to produce the same amount of proreins1.

As for the technical aspect, the raising of insects is very easy, practically without costs or energy, and requires very little space. I have experienced it with no difficulty (and not a lot of time) in 2014 on my balcony, using my domestic compost as food source for the larvae. 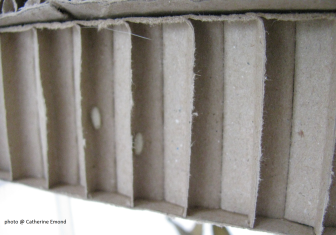 egg cluters laid on the arrugated cardboard over the compost

The main constraint is to ensure that the temperature remains clement. It has to stay above 15° C to obtain a minimum production, and 30° C for an optimal production. Moreover, insects need very little water, and can be fed from a variety of organic materials, which adds value to materials that would end up in landfills otherwise11, 12. Everyone can therefore raise insects at home without specialized infrastructure.

For example, raising black soldier flies (Hermetia illucens), a species renowned for its high protein content9, 13, require mainly organic matter to feed the prepupae, and enough space to allow the adults to fly and breed (about 2 m x 2 m is enough)13. On the consumers side, insects can be eaten fresh on a small-scale, but can also be dried and reduced to flour at a larger scale to ensure a better preservation of the product. Insect flour also offer the benefit of being less unattractive to consumers and to be easier to mix in more elaborated industrial livestock diets.

There are many insect species that you can raise at home. According to FAO, there are more than 1990 species of edible insects on earth. But first, you can be inspired by the caresheets of the Montreal Insectarium for the yellow mealworm and domestic cricket. Regarding the black soldier fly, I will provide a detailed caresheet shortly on this blog.

The next step will be to start incorporating insects to your favorite recipes!